This weekend we homebrewed for the first time in about two years. Homebrewing is close to our hearts, and was one of the catalysts for creating this blog.

People ask us all the time how we got into beer. Here’s the abridged version.

One of Giancarlo’s closest friends from college (he went to Union College, near Albany New York) did a term abroad in Germany. While overseas he had experienced a lot of amazing beer, and brought his newfound knowledge back to New York. They started tasting different craft beers. This friend is a scientist, so their next step was to experiment with homebrewing. During senior year they brewed a few batches, which were actually quite tasty.

I was a few hundred miles away at Boston University, and while out one night, a friend and I drank Harpoon UFO. From then on I was hooked on craft beer.

When Giancarlo and I moved to New York together in the fall of 2008, we began visiting craft beer bars in the city (Burp Castle was the first we tried). Giancarlo brewed with a few of his graduate school friends, but had to do so in his parents’ backyard on Long Island, since our small apartment wasn’t equipped.

In the fall of 2009 we started blogging, and also discovered the newly-launched Brooklyn Brew Shop. A few months later we brewed our first one-gallon batches. We wrote about it here.

Since then we’ve brewed off and on. Due to lack of space and inability to control temperatures in our apartment, it’s been a challenge. We kept our equipment stored away, always in the back of our minds.

Recently our close friends Jackie and Mike mentioned an interest in homebrewing. They live on Long Island, and happen to have a turkey frier and spacious backyard. The perfect setting for making a five-gallon batch.

We spent the day with them and brewed a pale ale. Since it’s been a while, we did an extract brew, ingredients of which we of course purchased at Bitter & Esters. We’ll be bottling it in a few weeks.

It’s good to be brewing again. 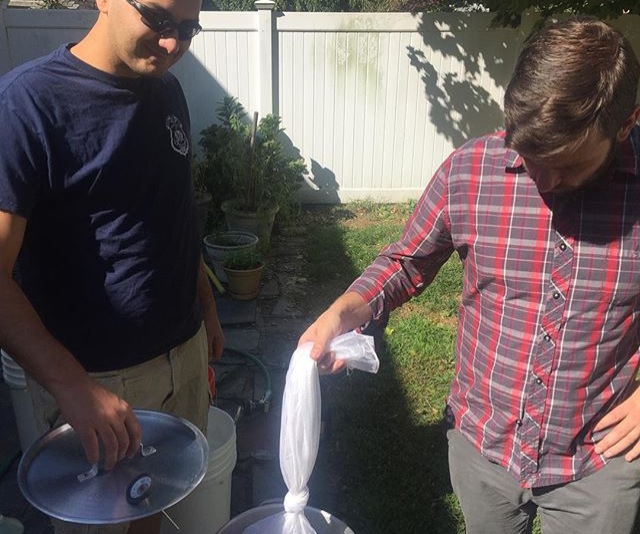